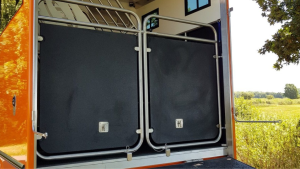 Horseboxes and a cautionary tale of mixing metals

For the equine community the focus is now on overweight horseboxes and in a short span of years aluminium has turned into a great product for weight saving and on a less positive note, a great sales tool too. Having said all the above, it is also a fact that aluminium is not the cure all product for the manufacture of lightweight horseboxes that you would at first imagine. For all its positives there are some failings and some quite important points to be aware of.

Firstly, the amount of research and development into using aluminium within the equine industry is trifling when compared to the major vehicle manufacturers. In many cases horsebox builders use no research or development whatsoever, they simply copy what others do with the hope it outlasts any warranty period.

Where aluminium is used in horseboxes, its failing tends to be that it does not ‘play well’ with other metals and can rot at a much accelerated pace when used incorrectly. Sadly, much of the damage we see is either from corner cutting by a manufacturer or simply poor engineering knowledge at the construction stage.

Where used correctly aluminium is a great product for external body work, including doors and cappings, where it has been used successfully for many decades. On the flip side it is worth highlighting that where aluminium is used in structural areas like plank floors or ramps, flexing will inevitably cause damage and this is usually along welds, fixings and joints. For horse safety reasons where aluminium is used structurally, we would advise regular inspections becoming a matter of routine. I would add that over the years we have repaired many so called lightweight aluminium ramps and in every case the damage caused by flexing and poor construction has caused accelerated rot and joint cracking. 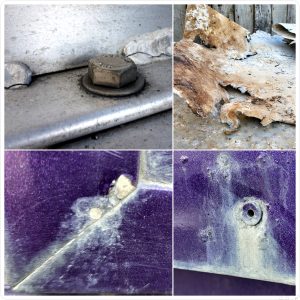 As an example we repaired a 7.5 tonne ‘All Aluminium Ramp’ of less than two years old and in this case, it was out of the warranty period by twelve months and had become the customer’s problem to fix. The ramp had failed on welded corner joints and all the ramp hinge points, prompting this cautionary tale of mixing metals …and hopefully giving some context to its correct use. I would reiterate that it is an excellent product when used correctly and this is not a post to dissuade customers from aluminium. Rather, it is to highlight what can and does go wrong with many horsebox builds, and raise some questions you may want to ask your coachbuilder before placing an order.

The devil is in the details and the missing details on this particular ramp was poor engineering knowledge and missing barriers between the aluminium and bare steel ramp parts. Being the main cause of this ramp failure, I will take a moment to talk about galvanic corrosion. In simplified terms galvanic corrosion is an electrochemical process in which one metal corrodes at a much accelerated rate when two differing metals are directly touching. Over the years one of the main causes of damage we see in our horsebox repair centre is damage from galvanic corrosion and in all cases it would have been avoided with a simple barrier between the metals (usually a plastic spacer).

1. The first problem with the ramp in question was that it was simply a poor design and was made from standard aluminium box sections, slightly thicker than the steel equivalent. It was in essence a steel ramp design made in aluminium. Every joint was welded and had cracked; all showed some signs of metal fatigue caused by flexing. The welding of these joints allowed for no flexing whatsoever and was a serious design flaw. Horsebox ramps are rarely on even ground and flexing is a big part of daily use. All designs optimised for aluminium need to be manufactured using sections up to 40% taller than the steel equivalent and the joints should be designed to allow for flexing.

2. The barrier separating the two dissimilar metals was not total and there was in fact only paint between the steel hinges and aluminium ramp frame. In essence the ‘All Aluminium Ramp’ had many mild steel parts including hinges and the lack of a barrier between the dissimilar metals had caused severe galvanic corrosion of the aluminium box section to the point where the spring mounts had a catastrophic failure. Alarming when you consider a ramp spring can have up to 6 tonnes of compression when the ramp is open!

3. The bolts fixing the two dissimilar metals together had no barrier and had contributed to further galvanic corrosion. This was actually a theme throughout the horsebox body and even the aluminium plank floor had corroded and then cracked around the fixing points. Unfortunately this is the most common horse floor issue we see. To tick the aluminium horse floor box and build as cheaply as possible, aluminium planks are riveted directly to a steel.

4. Other failures on this particular horsebox were the common mistakes we see all too often. It had been completed and sent somewhere else for paint. Many of the aluminium parts, especially where it had been cut had started the oxidation process. It suffered from poor preparation, poor sealing, road spray and contamination. This presented as bubbling with white oxidation powder on the corners of doors, frames and around all external rivets and bolts. More alarming for the owner, sheets of paint were peeling away from large areas of the aluminium skirts and ramp.

As an industry we have a love hate relationship with aluminium. We love it for its lightness and relatively low cost and we hate it because it needs costly, extra engineering processes to add the longevity and strength that we demand. Often the thickness and size of aluminium section we would need dictates that we use the more expensive and far superior stainless steel option.

It is unfortunately a sign of the times and regrettably, much of what customers hear in relation to aluminium and horsebox manufacture, is just sales driven patter with little basis in fact. Yes, aluminium is without question a lightweight product; however for horsebox manufacture it must have thicker, taller sections to have the same structural strength as steel or stainless steel. Even then, the design must be specific to aluminium and must allow for quite a large degree of flex. Barriers must be used where it touches other metals and this even extends the fixing bolts. Aluminium is extremely beneficial for very specific parts of a horsebox build. The priority should always be safety, strength and longevity over lightness. Ultimately safety is the goal here and you must have complete faith in your chosen manufacturer. Regardless of the materials used in construction or the age of your horsebox, it should be inspected as a matter of routine on a regular basis. Inspections to include horse area floors, ramps, horse doors, horse partitions and roll over steps along with other scheduled checks.

Thank you for reading. If you need advice on any horsebox topics, please get in touch.

Fri to Sunday: Viewings by appointment