The first horsebox a tale of guile, invention and ingenuity 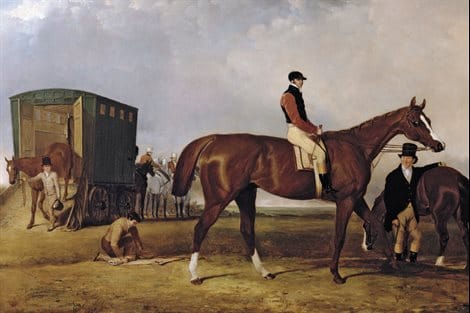 Have you ever wondered who had the idea to transport horses in the first horsebox? We have to go way back to 1836 and the fifth Duke of Richmond who formed a close partnership with the ‘Leviathan of the Turf’, the colourful Lord George Bentinck. The story goes that Lord George won the 1836 St Leger with the horse Elis at very long odds, ensuring that, as his owner, Bentinck pocketed not only the £12,000 from his bet, but the purse too.

In 1836 horses travelled to every single race meeting on foot, so everyone always knew which horse was on the move and when. A mere four days before the St Leger, the horse Elis did not appear to have left Goodwood. It seemed that the horse would not have a prayer of walking the 200 miles and then being a contender for the race. As race day drew nearer the odds lengthened to 12-1, in fact these were extremely long odds considering that Elis was such a good horse.
When race day arrived and Elis walked out he looked fresh and much to everyone’s amazement, easily won the race. It transpired that he had been pulled north by alternative horsepower, in what was probably the prototype of the first horsebox. The first horsebox was constructed by a local coachbuilder delivered Elis fresh and ready to race, with both the public and racing fraternity none the wiser!

It was a cunning gambit that paid off and one that changed the face of horse transport forever. Ironic really when you consider that the horses of the time were mostly used to pull carriages and today they are transported with carriages in the form of horseboxes and horse trailers!